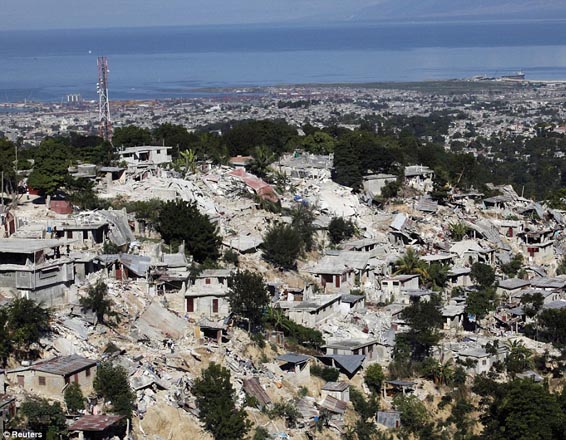 Last week, we posted an article: Haiti: International Aid Mobilization On The Way. Like everyone, we wanted to react about the earthquake that devastated Haiti and express our compassion and our solidarity with the Haitians. There is not one day we do not talk about it and yesterday, Max Dana published on her Blog titled: ‘Haiti: compassion, communication, occupation… Education?’.

This article is worth to read if you want to go further the facts as they are presented to us on every channels. No pre-conceived view, no judgment, but a detailed article getting into controversial issues and offering an interesting point of view concerning the situation in Haiti which needs to be thought about. We like constructive criticism at the Sama Gazette; your participation is welcome!

“On January 12, 2010 a 7.0 magnitude earthquake has struck off the coast of Haiti. The severe earthquake caused major damages and images taken in Haitiin the aftermath of the earthquake quickly came into full view, revealing a devastated country, total disaster and chaos. Organizations already working on the island, gave the first help while international aid was on its way.

Compassion
We were all shocked and horrified by what was shown on television and on the Internet. Port-au-Prince, capital of the country, was no more. The city is a giant ‘mille-feuille’, buildings are now multiple layers of broken concrete, with people wandering the streets looking for help, food, water and family. No way we can look away before such a big natural catastrophe, amplified by the weak infrastructure which produced such unprecedented damage, and a catastrophic economic and social situation. We donated money and see the help coordinating is a relief.

Communication
And we are still seeing this coordination taking place, we see it everyday, on the front news, on television, on the Internet… Everywhere. The massive earthquake which devastated Haiti is the largest to strike the Caribbean nation in more than two centuries. Organizations know donations are important and they were among the first to react. We know they need our financial help and even people facing economic difficulties donate as much as they can afford. The horror of the situation is striking enough to generate compassionate reactions all around the world. But I can hear, here and there, people saying: ‘We know what is the situation, organizations are on the work, no need to bombard us everyday with images of people dying or murdered. We can’t change that, we already donated money!’. And obviously, we are not Goldfishes with three-second memory only (sic), I still remember very well the images from Katrina and the Tsunami, they have been haunting me for months… So why so many images? A cynic would say it’s to create a diversion and distract everyone from the real issues we are facing in our own country so any other news or even criticism become irrelevant. We have already been there (News cycle turnover, our today’s worst enemy?). Some people like French journalist Laurence Haim of Canal Plus Television (the only French-Press-accredited, White House correspondent) wonders if ‘Journalists are not doing too much’ and Dawn Olsen on Technorati is asking: ‘Is CNN Blurring the Line Between Journalism and Heroism?’ [Link] Some others see opportunism in the organization of the two-hour Telethon airing Friday, and more and more people are questioning the presence of the United States in Haiti: ‘Why is the U.S. being overzealous in taking control of the airport? Why do they decide who can help and cannot? Where is the U.N.?’

Occupation
This question leads us to ‘occupation‘. Alain Joyandet, the French minister in charge of humanitarian relief, had been involved in a scuffle with a US commander in the airport’s control tower over the flight plan for a French evacuation flight. ‘This is about helping Haiti, not about occupying Haiti’, he said. The online edition of The Telegraph indicates: ‘Geneva-based charity Medecins Sans Frontieres backed his calls saying hundreds of lives were being put at risk as planes carrying vital medical supplies were being turned away by American air traffic controllers.’ [Link] Here we are. Again. The most powerful nation on Earth being accused of ‘occupying‘ another nation. But this time (unlike the highly criticized invasion of Iraq), it’s for good and unanimous reasons: save the people. One would say: ‘How can you even think for a second the United States has a hidden agenda by sending in help and troops?!’. That’s right, we shouldn’t even think about that, Haiti is in need of everything and considering the dire situation, people should not waste their time on such stupid questions and unnecessary criticism. But I know a Haitian family (who may not be a representative sample of the population but their voice counts) who thinks the U.S. is going to stay in their country for quite some time and they are also preoccupied by the current diplomatic situation while so many people are still waiting for support. The Miami Herald writes: ‘In another weekend incident, 250 Americans were flown to New Jersey’s McGuire Air Force Base on three military planes from Haiti. U.S. forces initially blocked French and Canadians nationals from boarding the planes, but the cordon was lifted after protests from French and Canadian officials’. [Link] And The Telegraph adds: ‘US commanders insisted their forces’ focus was on humanitarian work and last night agreed to prioritise aid arrivals to the airport over military flights, after the intervention of the UN.’ [Link] Regarding these ‘minor problems’ (said French Foreign Ministry spokesman, Bernard Valero) and the disastrous plight in Haiti, you can’t blame some Haitians to worry about their situation (read: ‘US vilified at Haiti airport’ from the Associated Press [Link]) and wonder what will happen to their country in the months to come. On the other hand, regarding the controversy, some Americans are saying the United States should stop all funding and help in Haiti and let other countries deal with it. But the truth is, we need the U.S. as well as any other country and people of good will (Darfur, Congo, Burma: is ‘good will’ enough?) to help Haiti. So why bother with tidle talks then?

Education
Right. Don’t bother. But at least, we should try to better understand why these questions are raising and if they are legitimate or not. Criticism coming from the French like: ‘This is about helping Haiti, not about occupying Haiti’ is not well perceived by many for a simple reason: Haiti was a French colony from 1697 until it won independence in 1804, and France is often accused of being in a large part responsible for the current situation in Haiti. As for the United States, Americans occupied the island from 1915 to 1934 and the result was a financial system that siphoned the country’s wealth to offshore creditors instead of reinvesting it in the country’s economy (read more on Wikipedia / Haiti [Link]). So here we are, decades and centuries later. Maybe it should be the time we see the big picture and not only the current situation. Every event in the world has consequences and we can’t exclusively focus on the moment and elude the root causes. Of course we have to help Haiti, there is no question about that. But I wish education would be part of the solution. The many issues Haiti is facing are not new (excepted for some people who just discovered the existence of the island…). Before the earthquake, we knew it was the poorest country in the Western Hemisphere. We also knew the country was under dictatorship, dealing with violence and corruption for years. But Haiti is also the world’s oldest black republic and the second-oldest republic in the Western Hemisphere, Haitians are resourceful people and our help should not stop after the earthquake but last until the people can finally live properly in their country. We are not talking about occupation or any kind of patronizing. We are talking about working together and find long term solutions, and not to make Haiti dependent on aid from NGOs or foreign countries. I know I may be stating the obvious, but so many countries are still today, dependent on aid from NGOs or foreign countries and that’s why so many of them are stuck and don’t have the necessary raw material to leave the illusive nest, because it’s far more complicated to teach how to do things than deliver the final product. When help is provided, it’s to humbly nudge people in the right direction, not make them dependant and as a result, not allowing them to develop. But economic and political interests are often what underpin most of the military, economic and humanitarian interventions… Sad but true.