▲
The Sama Gazette > Posts > Categories > Avant-garde > Art in Mali: Art as Real as Life Itself

Art in Mali: Art as Real as Life Itself 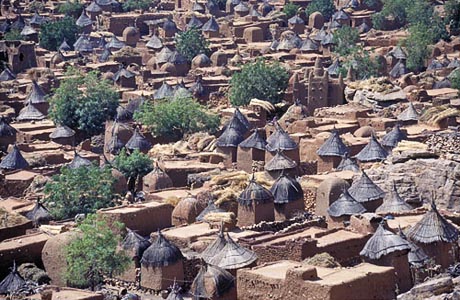 Today, our ‘Art in…’ post is not about a particular artist. Two weeks ago, a reader (hello Babouyou!) sent us a link to an article on the New York Times about  art in Mali.

We read it and it was so well written and interesting, with a great insight on the Dogon art and culture, we decided it should be part of this weekly post about Art.

Here are some extracts from Holland Cotter article ‘In Mali, Art as Real as Life Itself’:

Political tumult in the last few weeks — a military coup, a Tuareg and Islamist takeover in the north — has all but eliminated tourism in this West African nation, which has long been a magnet for Western travelers in search of firsthand encounters with living art traditions […] The Dogon, a farming people said to have come to the region centuries ago to avoid conversion to Islam, have long since been claimed by that religion and by Christianity alike, and by the most seductive of faiths, secular materialism. And as the force of incursions has increased, age-old means of self-support have diminished. Climate shifts and the departure of young men to cities have made agriculture a constant and losing struggle.

This is a must-read article!