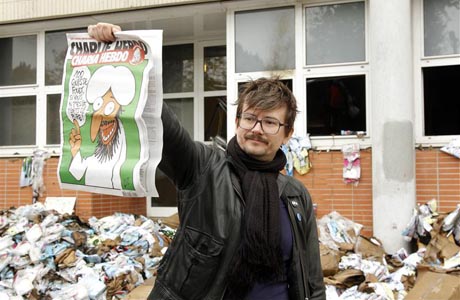 Earlier this morning, the Paris offices of French satirical magazine Charlie Hebdo have been destroyed by fire, by a petrol bomb attack causing extensive damage.

Many strong reactions followed the attack, from French authorities but also from the French press claiming the bombing of the Charlie Hebdo offices should make everyone stand up for freedom of expression. French Prime Minister Francois Fillon said: ‘Freedom of expression is an inalienable right in our democracy and all attacks on the freedom of the press must be condemned with the greatest firmness.’

The Guardian writes about this attack:

The fire happened before the “sharia” edition was to hit news stands on Wednesday morning in what the paper had mockingly called a “celebration” of the victory of the moderate Islamist party An-Nahda in the Tunisian elections and the Libyan transitional executive’s statement that Islamic sharia law would be the country’s main source of law. On the front page a cartoon prophet Muhammad says: “100 lashes if you don’t die of laughter!” It is not the first time the weekly has published cartoons of Muhammad, depictions of whom are forbidden in Islam. In 2007 a Paris court threw out an attempt by two Muslim organisations to sue the paper for reprinting the prophet Muhammad cartoons that had been published by a Danish newspaper and sparked protests worldwide.

Whether you think the satirical magazine has offended Muslims or not, one thing is sure: violence is certainly not the best response… Note that  the identity or the motives of the arsonists has not been established.

Illustration: French cartoonist Luz outside the Charlie Hebdo offices after they were attacked.
Photograph: Revelli-Beaumont/SIPA/Rex Features