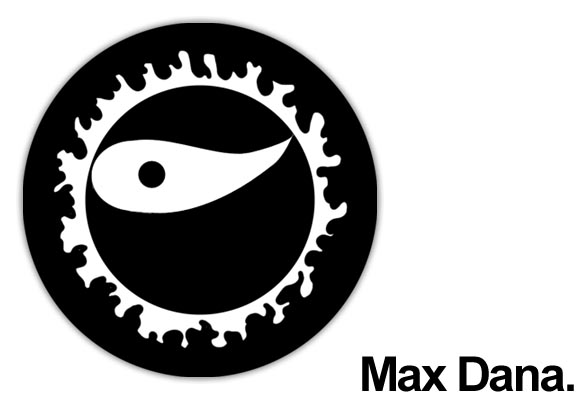 Max Dana is a committed artist and when it comes to her sources of inspiration, they are multiples and very different. But everything started with graffiti in the Eighties. If you are a regular of Max’s Blog then you already know about that important point (she also mentions graffiti in her bio) but you will learn more in her last blog post. We know her very well and we did learn a lot about her, so we guess you may learn a thing or two too.

Her previous blog post was about Conflict minerals: the bloody Pandora’s Box… ; now it is about hip hop, graffiti and video games. But everything is coherent with Max, read the last paragraph of her post and you will understand what it all means… ‘Everything is connected’ like she uses to say!

It was the end of the 80’s and everything was going to change for me. We used to meet in the lobby of the building, the smooth floor was perfect for teenage boys (and some adventurous girls) to glide and moonwalk. They were also slipping and tripping, a boombox was jamming out hip hop music before we decide to go ‘look for a wall’. At this time, everything was new to me (music, fashion, dance, graffiti) but it was hard to find these novelties. Living in France, things were a little different than in the US: if you wanted a pair of Jordans, you could hardly find them here, but we had a plan: the father of a boy from school was a pilot (Paris/New York/Paris flights) and once a week he brought back a pair or two of Jordans to his son. Which shoes were immediately sold to one of the member of our group. This young boy made a lot of money for his age!

Grandmaster Flash, The Sugarhill Gang, Afrika Bambaataa, MC Hammer, Public Enemy, Run DMC and many others put rhythm into our creative expression. Some kids (we were between 13 and 17 years old) were great dancers, some others were amazing musicians, and 3 or 4 were spray can Gods; as for me, I would say I was an ‘active observer’. First we used to meet at a friend’s house, he had a NES and the lucky ones who could buy NES games like Punch-Out or Ghosts ‘N’ Goblins (imported videogames cost a fortune at this time!) were dealing their entry to the party; if you had the Zapper light gun, you would be instantly promoted MC. The others (I was among them) had to earn their right to join the party by winning the game (I had to be good to play, Game & Watch: 60 grams of happiness). The atmosphere was very friendly, we came from different schools, and it was a place where kids of different races/ethnicities/social background could meet. Most of us didn’t have a lot of money but we always managed to entertain ourselves, one of our favorite activity was rollerblading, skateboarding, and tagging when we found the perfect (in)appropriate place.

When I look back, I realize most of us were spontaneous amateurs. We were not organized into a ‘clan’ and we were not taking the same risks nor were we as good as our mentors like Lokiss, Bando, 123Klan, GrimTeam, MAC Crew or Futura 2000. These meetings started just before Andy Warhol had died and lasted for more than a year, then everyone moved on something else; that was around when Jean-Michel Basquiat died. As a basketball player, I was a big fan of French player Richard Dacoury and amazed by Magic Johnson and Michael Jordan’s style. I wanted to go to New York and have a look at Seen’s graffiti and see the subway drawings of Keith Haring. In Paris, I remember I drew my observing eye Da-Eye just below one of the famous stencil rat spray painted by Blek le Rat. There were also other French stencil artists such as Miss.Tic, Nemo and Jérôme Mesnager whose work can still be seen in the 20th arrondissement of Paris.

I am a bit nostalgic of this period but in retrospect, I also remember everything was not so ‘great’. It is just that sometimes I like to think about a time when everything was new, when I thought everything was possible, that the world would be better in the years to come because of social interaction and by the public acknowledgment French society was made by and of people coming from different countries. French anti-racist NGO SOS Racisme was created and we were singing We Are the World (and French song ‘Ethiopie’). But things didn’t turn out the way I expected they would, on the contrary… Maybe that is why I define myself as an ‘optimistic-pessimistic realistic-utopian person’. This may sound confusing but when you look at the world like it is, with people of good will working hard to help people in need, meanwhile some others are only focused on getting more and more money or on purposely destroying lives, this oversimplification reveals an even more complex reality you can hardly sum up with only a few words.

Graffiti, Hip Hop, basketball and videogames were not the only interests I had when I was a teenager, I later discovered Jazz, films noir, fashion design, philosophy… Each period taught me a lot and even if life wasn’t easy everyday, mine has been enriched by what I saw, shared and learned at this time. I am often asked where my inspiration and my commitment come from; part of the answer comes from these successive periods in my youth which had a significant influence on my personality. The other part is definitely more intimate. I never stopped drawing Da-Eye on walls even if now I only do it on special occasions. Da-Eye is a ‘vestige’ from the 80’s, it was the signature I used to put on walls, meaning: “I was there, I’ve seen you and your work“. For me graffiti has always been a way to be seen, to exist and to gain freedom. Today’s world is more about creating buzz, living a virtual life, over consumption and ultra violence… Puzzling.

These ‘old’ times were certainly not perfect but more than two decades have passed and the world ain’t any better. Referring to the title of this post, I’m still listening to Grandmaster Flash, I am still a big fan of Seen (From sgraffiti to graffiti, from Cauchie to Seen, Mars-1 Observer Seen and Delta Inc. have landed) and if I don’t wear Jordans anymore, I do have a couple of great old sneakers at home. I like the ephemeral and transient nature of street art which only exists for a moment, hours, days or months before it is covered by new graffiti, cleaned up or destroyed. I remember I wrote an article in the student newspaper I created (which, by the way, was closer to a fanzine than a newspaper) about the connection between graffiti and life: ‘Street art is as fragile and transient as life is’. My ‘philosophical’ approach of graffiti was way to reactionary for the adults who read my article and who said I was an anarchist, even though I didn’t consider me as a maverick or a rebel. That was until I wrote about the Sudanese Civil War, the taboo surrounding AIDS, the famine in Ethiopia and the Tiananmen Square massacre. Inconvenient truths and taboo topics in the late Eighties, but did anything really change? No, as far as I know. But that is another topic I have already discussed many times on this blog, like in Darfur: when History is a never ending story… or News cycle turnover, our today’s worst enemy?

To conclude, I would say the ‘good old days’ is a subjective notion, but these days played an important part in my life and that is a sure thing!