Modern Art at the Centre Pompidou (Beaubourg) in Paris 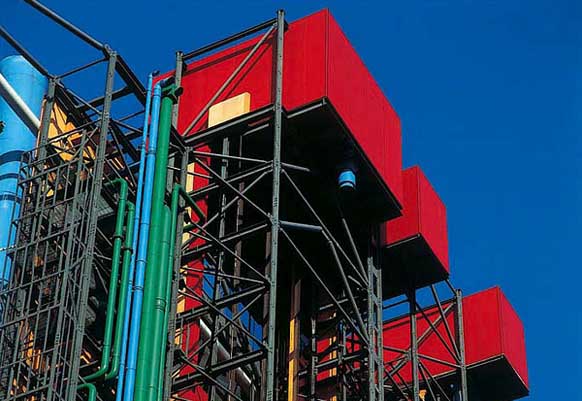 The Centre Pompidou in Paris, France, is one of our favorite places for Art. There is always something new to see, artists to discover, one of a kind exhibitions and famous and rare works of art… If you are into Modern Art, whether you live in France or abroad, the Centre Pompidou (also known as Beaubourg) is the place you have to visit if you come to Paris, or you are really going to  miss something.

Max Danaenjoys visiting Beaubourg and its great exhibitions. Earlier this year, she wrote about the retrospective celebrating the work of French painter Pierre Soulages: Pierre Soulages: black like you never saw it before. She also appreciates the work of Romanian sculptor and pioneer of abstract sculpture, Constantin Brancusi; no doubt she will visit the reconstitution of his Paris workshop at Beaubourg!

Current exhibitions at the Centre Pompidou are:

– Dreamlands (May 5 2010 – August 9 2010). The exhibition considers for the first time the question of how World’s Fairs, international exhibitions, theme parks and kindred institutions have influenced ideas about the city and the way it is used

–  The Museum’s collections (March 17 2010 – February 21 2011) with Contemporary collections. For nearly a year now, level 4 has hosted a thematic exhibition entitled elles@centrepompidou, dedicated to women artists. Modern collections: new hanging. Level 5 is dedicated to modern art from the beginning of the 20th century till the 60’s.

There are also regional exhibitions and abroad, with Détours d’objets, Hijacking objects in Lille, France. The subversion of images, Surrealism, photography, film in Madrid, Spain. Jim Hodges, Love eccetera in London, England. And of course, Pierre Soulages at the Museo de la cuidad in Mexico. You can also visit the Centre Pompidou in Metz, France, an ‘extended expression of the original Centre Pompidou spirit’.

Visit the Agenda of the Centre Pompidou for more information.

About the Centre Pompidou (more on this page):

The Centre national d’art et de culture Georges Pompidou was the brainchild of President Georges Pompidou who wanted to create an original cultural institution in the heart of Paris completely focused on modern and contemporary creation, where the visual arts would rub shoulders with theatre, music, cinema, literature and the spoken word. Housed in the centre of Paris in a building designed by Renzo Piano and Richard Rogers, whose architecture symbolises the spirit of the 20th century, the Centre Pompidou first opened its doors to the public in 1977. After renovation work from 1997 to December 1999, it opened to the public again on 1 January 2000, with expanded museum space and enhanced reception areas. Since then it has once again become one of the most visited attractions in France. Some 6 million people pass through the Centre Pompidou’s doors each year, a total of over 190 million visitors in its 30 years of existence.

We hope you will visit this amazing architectural place which is also a great place for Modern Art. If you do, let us know 😉

---------------------- Geek / Games / Tech + Twitter Ba(a)zar ----------------------
Twitter Ba(a)zar is back! Here’s a collection of the best Geek, Art & Toys news from Twitter we selected for you! Let’s start with a Be@rbrick × Transformers × BAPE special collaboration, but it’s unfortunately only available in Japan. The same goes for Baby Milo Stormtrooper, only available on Amazon Japan. But French people can rejoice, a great vinyl toy has just arrived at Artoyz: Superplastic x Guggimon – Fever Dream Fashion Horror SuperGuggi. Rotofugi announced new releases by Shoko Nakazawa x The Little Hut, and The Visible Labbit Neon Edition by Frank Kozik dropped at Kidrobot last week, but sold out immediately (we even tweeted our despair about it ...