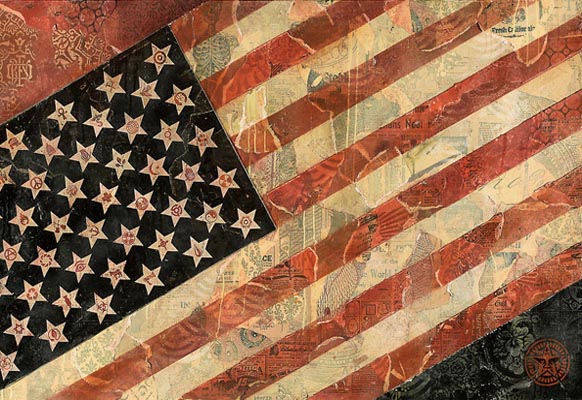 Shepard Fairey‘s new show, May Day, opens this Saturday at Deitch Projects (18 Wooster Street, New York City). That’s a great news for anyone, like us, who appreciate the work by this artist aka Obey Giant.

About the exhibition (read more here):

Deitch Projects is pleased to present May Day, an exhibition of new work by Shepard Fairey, as its final project. Titled not only in reference to the day of the exhibition’s opening, the multiple meanings of May Day resonate throughout the artist’s new body of work. Originally a celebration of spring and the rebirth it represents, May Day is also observed in many countries as International Worker’s Day or Labor Day, a day of political demonstrations and celebrations coordinated by unions and socialist groups. “Mayday” is also the distress signal used by pilots, police and firefighters in times of emergency.

Shepard Fairey declares about the third meaning of May Day:

“By now we thought we would be in post-Bush utopia, but we’re still having to call attention to these problems […] If we stay silent, there’s no hope […] But if we make noise, if we put our ideas out there, then maybe we can make a change like the people in the portraits have done.”

He says about the artists, musicians and political activists he most admires:

“These people I’m portraying were all revolutionary, in one sense or another. They started out on the margins of culture and ended up changing the mainstream. When we celebrate big steps that were made in the past, it reminds us that big steps can be made in the future.”

The artist painted a new mural on the corner of Bowery and Houston (the same wall where Keith Haring‘s original Day-Glo mural went up in 1984), a promotional piece for the exhibition running through 29 May 2010.

If you’re not lucky enough to make it in person, available the night of the opening will be a limited release of the prints, so don’t forget to check Shepard Fairey’s Website on Saturday night.

Dear Sama New Yorkers, you know what you have to do! 🙂