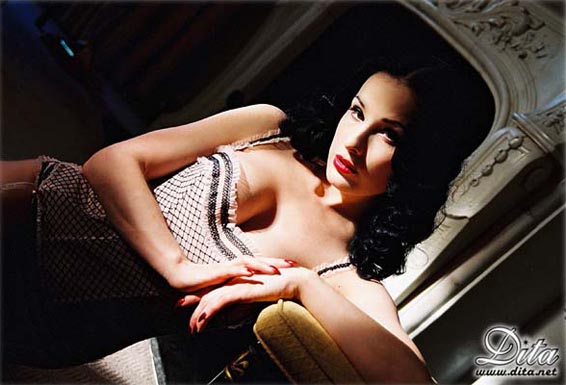 Dita Von Teese will be performing in Paris next week.  If you don’t already know the ‘Queen of Burlesque’ , here is what we can read on her officiel website:

She is one of a kind. She is the biggest name in Burlesque since Gypsy Rose Lee. She tops international Best Dressed lists. She is a modern day Fashion Icon. She inspires designers from Marc Jacobs and John Galliano to Jean Paul Gaultier and Zac Posen. She is credited for bringing back the glamour and allure of Old Hollywood stars. Self-created. Distinctive. Iconic. Flawless. Often imitated, never duplicated. She is Dita Von Teese.

And I could define her in a better way. She is definitely one of a kind, she is glamorous and she is often imitated but never duplicated. So if you live in Paris and if you want to see her, you might still have a chance to attend one of her shows next week. Dita Von Teese will be part of the Gentry de Paris Revue September 7- 17, 2009 at the legendary Casino de Paris (see website for more information about the event and reservation – tickets also on sale on the FNAC website).

And for your eyes only, the teaser clip of the Opium Den show filmed at the Avalon, Hollywood in July 2009.