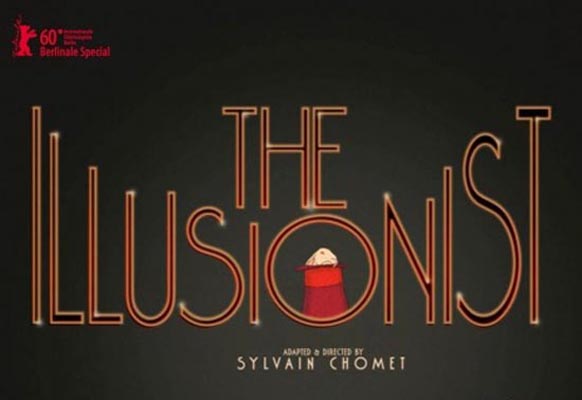 Sylvain Chomet‘s new animation film ‘The Illusionist’ is based on a 1956 unmade, deeply personal script by French cinema legend Jacques Tati. The hand drawn, 2D animation feature film from the director of ‘The Triplets of Belleville’ is about a dying breed of stage performer, who is believed to be a version of Tati himself. Chomet chose to mimic Tati‘s visual style and fans will love it.

The film is now out in theaters in France and in the U.K. Here is more about ‘The Illusionist’ story:

The Illusionist is one of a dying breed of stage entertainers. With emerging rock stars stealing his thunder, he is forced to accept increasingly obscure assignments in fringe theatres, at garden parties and in bars and cafes. However, while performing in a village pub off the west coast of Scotland, he encounters Alice, an innocent young girl, who will change his life forever. Watching his performance to the excited and amazed villagers who are celebrating the arrival of electricity to their remote island, Alice becomes awestruck by our hero and believes his tricks are real magic. Following him to Edinburgh, she keeps his home while he goes to work in a small local theatre. Enchanted by her enthusiasm for his act, he rewards her with increasingly lavish gifts he has ‘conjured’ into existence. Desperate not to disappoint her, he cannot bring himself to reveal that magic does not exist and that buying these gifts is driving him to ruin. But as Alice comes of age, she finds love and moves on. The Illusionist no longer has to pretend and, untangled from his own web of deceit, resumes his life a much wiser man.

We will go see the movie in the coming days, as well as Max Dana who is a big fan of Jacques Tati. She wrote in Jacques Tati: timeless comedy and satire with Mr Hulot: “Originally a mime, the action in Tati’s movies is tightly choreographed and there is little to no dialogue. The trench coat, the umbrella and the pipe of Monsieur Hulot are the trademark of one of the most memorable comic characters in cinema. The innocent and kindly nature of Hulot, his bafflement and confrontations with modern technology and the idiosyncrasies of the humanity, reveal so much about us, far beyond the definition of slapstick comedy. Especially in Mon Oncle and Playtime, Hulot is like a specimen in a laboratory experiment, the human figures look lost in a sterilized Paris in Playtime, or enslaved to technology like in the ultra-modernized Villa Arpel in Mon Oncle.”

There is a private torment behind Tati’s “The Illusionist” published by Roger Ebert. We didn’t hear about it in France. But it won’t in any way ruin the quality of the film. Watch the trailer below, it is in French but you really don’t need words to connect to the story…