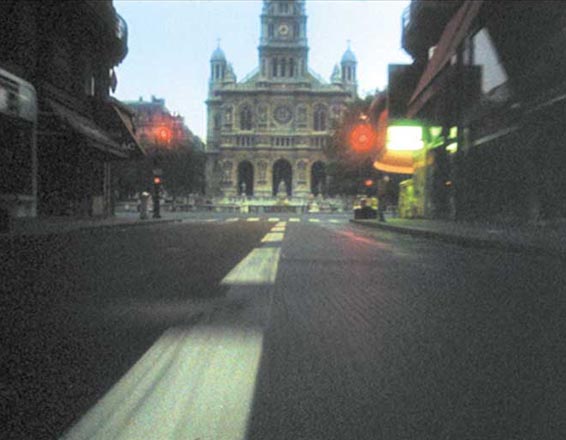 Today is Friday, some of us have already left the office and when we read Max Dana‘s latest post published on her blog yesterday, we thought it would make a perfect Friday update. Max talks about a great short movie directed by Claude Lelouch in 1976. And we agree, if you have never seen it before, go buy or rent the DVD!

“How did I forget to mention ‘Rendezvous’? I enjoy gun scenes in movies (From Scarface to Smokin’ Aces: the art of the gun scene) and also car chases in movies (Car chases in movies: Bullitt, Terminator 2, Mad Max 2…). That was two years ago, when I shared with you my favorites car chases scenes in Terminator 2: Judgment Day, Thelma & Louise, The Blues Brothers, Mad Max 2: The Road Warrior, The French Connection, Grindhouse/Death Proof but also in The Fast and the Furious, Ronin, Taxi, Gone in 60 Seconds. And last but not least, Bullitt (Steve McQueen: Bullitt chase scene GPS tracked). In fact I didn’t really forget to mention Claude Lelouch’s ‘Rendezvous’ short movie because it doesn’t really feature a car chase scene, although it’s definitely one of the most famous motoring footage of all time.

If you have never heard of this movie before, maybe you would be interested by a little introduction to it. In 1976, French director Claude Lelouch (the maker of ‘A Man and A Woman’) made a short movie: ‘C’était un rendez-vous’ known as ‘Rendezvous’in the U.S., a high-speed drive through the empty streets of Paris. No dialogue, no script, no plot, no special effects, no editing… The film was shot in a single take, and shows an eight-minute drive through Paris at dawn, from Porte Dauphine to the Sacré Coeur. The speed of the car (a Mercedes-Benz 450SEL driven by Lelouch himself) is said to be over 150mph, and it was filmed from a camera mounted on the front of the car, with an added sound track (exhaust note and missed gear changes) coming from the director’s own Ferrari 275 GTB. All sorts of questions surrounded this insane sprint across Paris, such as: who was driving the car? Was the speed really over 150mph?

Whatever are the answers, it doesn’t change the fact that ‘Rendezvous’is an amazing piece of film footage and an absolute must see for any racing fan. The film has been re-mastered and released on DVD in 2003 by SpiritLevel; buy it to fully enjoy the speed, images and sound. So yes it could have put in danger pedestrians, many red lights were crossed and the speed was insane. Don’t ever do that even if I wish the traffic in Paris could be as smooth all day long. But it became a masterpiece of cinéma vérité and since I already talked about the car chases scenes, I couldn’t not mention ‘Rendezvous’.