Geektastic: Stories from the Nerd Herd 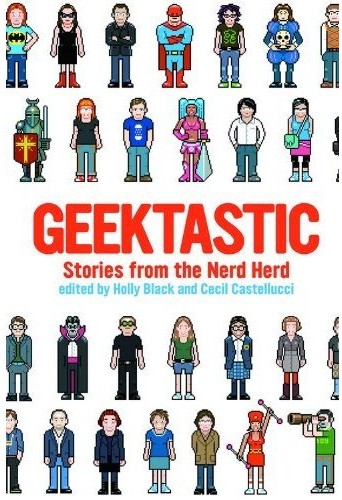 How would you define a Geek? Do you know some Geeks? Are you a Geek yourself? We had to check so we had a look at Wikipedia > Geek and here is what we found:

– A derogatory reference to a person obsessed with intellectual pursuits for their own sake, who is also deficient in most other human attributes so as to impair the person’s smooth operation within society.

– A more recent school of thought sees Nerd as being a derogatory phrase, whilst Geek is simply a description. It is taken to be someone who is an enthusiast, often in things outside of the mainstream spectrum, of note is that in this definition, there is no reference to being socially inept in the slightest.

Interesting, isn’t it? But we got even better thanks to: Geektastic: Stories from the Nerd Herd by Holly Black (the bestselling author of The Spiderwick Chronicles and Tithe, Valiant, and Ironside) and Cecil Castellucci (the author of Boy Proof, Queen of Cool, Beige, and The Plain Janes).

Acclaimed authors Holly Black (Ironside) and Cecil Castellucci (Boy Proof) have united in geekdom to edit short stories from some of the best selling and most promising geeks in young adult literature: M.T. Anderson, Libba Bray, Cassandra Clare, Tracy Lynn, Cynthia and Greg Leitich Smith, David Levithan, Kelly Link, Barry Lyga, Wendy Mass, Garth Nix, Scott Westerfield, Lisa Yee, and Sara Zarr. With illustrated interstitials from comic book artists Hope Larson and Bryan Lee O’Malley, Geektastic covers all things geeky, from Klingons and Jedi Knights to fan fiction, theater geeks, and cosplayers. Whether you’re a former, current, or future geek, or if you just want to get in touch with your inner geek, Geektastic will help you get your geek on!