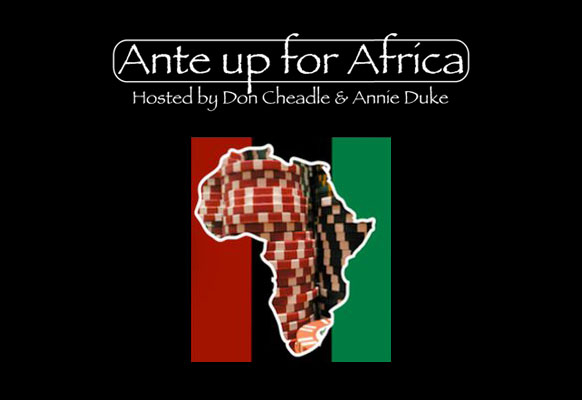 Ante Up For Africa is a non-profit organization founded by Don Cheadle, Annie Duke and Norman Epstein dedicated to raising money and awareness for Africans in need. The 2010 Ante Up For Africa Celebrity-Charity Poker Tournamenton Saturday, July 3 at the Rio All-Suite Hotel & Casino in Las Vegas offers a special opportunity as the only event of its kind where the general public can participate.

About the event (read more):

Ante Up For Africa, a non-profit organization dedicated to helping Africans in need founded in 2006 by Don Cheadle, Annie Duke and Norman Epstein, has launched an online fundraising campaign with the goal of raising $10,000 before the start of the 2010 World Series of Poker Main Event on July 5, 2010. The goal amount equals the cost of a buy-in to the world’s most prestigious and richest poker tournament.

“$10,000 is enough to change one person’s life at the World Series of Poker. But in Africa, it can change thousands of lives,” said Annie Duke. “With the poker world focused on the WSOP right now, we’re hoping poker players will once again step up and contribute, and even put aside at least the money towards one satellite buy-in, and instead donate it online to Ante Up For Africa, where the money can provide much-needed assistance to those in need in Africa.”

Ante Up For Africa has raised more than $3 million through poker tournaments for their partner organizations Refugees International, Enough Project and Darfur Peace and Development Organization. If you want to make a donation, you don’t have to be a poker player to Ante Up For Africa. 😉

---------------------- Films / TV Shows / Theater ----------------------
William Shatner turns 90 today! The science fiction series started in 1966 (none of us were born then, not even our founder!) but we’ve all watched him (and more than once). The iconic Captain Kirk of the Starship Enterprise is more celebrated today than ever, as Shatner remains the eternal face of the Star Trek saga. Shatner means a lot to us, as a performer and a human being. And because he’s so great (yes, we’re Trekkers and enthusiastic), he plans to celebrate his 90th birthday with a special event at the “Star Trek Set Tour” exhibit in Ticonderoga, New York, which was the filming location for the original Star Trek series. The weekend birthday celebration is ...

------------------- A la française + Films / TV Shows / Theater -------------------
One of our favorite film festival, the Champs-Élysées Film Festival is back for a 9th edition in 2020! Created by renowned French producer and distributor Sophie Dulac, it showcases French and American independent movies including feature and short films premieres and competitions, master ...