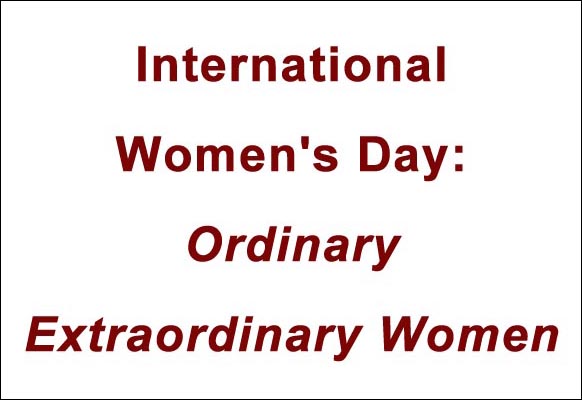 Today is International Women’s Day and even if we support women’s rights all the year, this specific day is dedicated to women. There are still so many things to do, so many women to help and support…

Last year we were with Max Dana and we have met with great women. We hope we will be able to organize an event next year, we are working on it. Meanwhile, we invite you to read the post Max Dana published this morning.

Last year I met with extraordinary women. There was Betti from Rwanda, Clara from Mexico, Armita from Iran and French women: Fatima, Laurence, Karima, Francesca, Caroline… All had in common a difficult life only because they were born ‘female’. Since last year, some of them are bringing good news, some others still struggle to make both ends meet. Every year we read awful numbers about rapes, killings, abuses, beatings on women and girls… And this year, again, is no exception, a lot remains to be done.

Susie Mesure, in her article published on The Independent writes: ‘Women are capturing an increasing number of seats in parliaments around the world, an Independent on Sunday survey to mark International Women’s Day has found. In places such as South Africa and Iceland, they are approaching parity with men, and in one country, Rwanda, they are actually in the majority‘. Yes, you read well, Rwanda.

Like I said in my previous post titled: International Women’s Day: Ordinary Extraordinary Women, International Women’s Day has lost a lot of its meaning over the years; even more since Clara Zetkin. This is the day when we see female presenters on television, the day some men make stupid sexist jokes and argue they also need their own ‘Men’s Day’ considering how much women are now emancipated… This anecdotal yearly event is more about cliche than bringing awareness about an actual fact: gender equality is still not a reality.

Last year I also mentioned several extraordinary women: Zainab Salbi, Founder and CEO, Women for Women International – Rose Mapendo, Mapendo International – Malalai Joya, Afghan politician, Author of ‘A Woman Among Warlords’ – Lisa Shannon, Founder of Run for Congo Women. But there are many others around the world, in every country. If you want to act, Women for Women organizes the Join Me on the Bridge global campaign. It is based on a simple concept: women (and of course children and men), be it two, 200, 2000 or more, join together on International Women’s Day to build bridges of peace. They do this by standing on a bridge near them and holding banners calling for peace, all over the world.

If the subject of women’s rights is a bit too serious for you, enjoy this video with Daniel Craig, directed by acclaimed ‘Nowhere Boy’ director/conceptual artist Sam Taylor-Wood, scripted by Jane Goldman (‘Kick Ass’) and featuring the voice of Dame Judi Dench. It starts with James Bond but it ends with unanswered questions. For now.