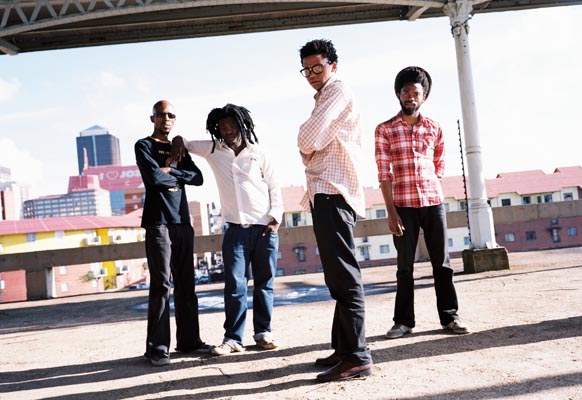 Today we suggest you to follow South African band BLK JKS (pronounced Black Jacks) on Twitter @BLKJKS although they don’t tweet so much. But it doesn’t mean they don’t do much, on the contrary. The first time we mentioned BLK JKS on the Sama Gazette was in June 2010 in: 2010 FIFA World Cup in South Africa: hopes and concerns. But the first time we read about BLK JKS was on Max Dana‘s Blog with Music of Africa: BLK JKS, from South Africa.

Here are a few words from Max’s post: ‘Jules Mageba, a friend of mine first sent me an email about the South African group in late 2006, and he wrote: “You like Jazz, you like African music, you’ll love BLK JKS!“. And when I listened to their song SK 1, he was right, I loved it. The song was released on a CD compilation given away with SL Magazine earlier that year and since then, the promising group has become a real phenomenon. Not only in South Africa but all around the world, and if you didn’t hear about it yet then let me tell you you are missing something huge.’

So if you don’t know BLK JKS yet, start with following the band on Twitter @BLKJKS!

brOdas and siStErs; a friend said, “South Africa has had and or has a lot of ISSUES, but this one… hOt! (as in… http://fb.me/yLDoqtXy

STUCK IN PARIS… aaAAaHh!!!! (hey, there are worse things in the world right?)

If you liked what you read and watched from BLK JKS’ tweets, then visit their official website, go to their Myspace and follow them on Facebook. And don’t miss ‘Summertime’ video, it is really, really good!