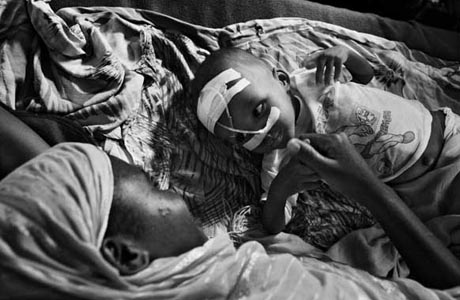 Last year we posted about the MSF‘s Campaign: Starved for Attention: The time to act is now! Now we can read on the campaign webiste: ‘Over the past year, MSF has met with government officials from the top food aid donor countries and held photographic exhibitions and events in over a dozen countries in an international effort to rewrite the story of malnutrition’.

The campaign had been brought to the attention of the world but if you really want to help, you have to sign the “Starved for Attention” petition before June 27 to play an invaluable role in keeping the pressure on the top food aid governments to improve the nutritional quality of foods sent to feed malnourished children overseas.

From Starved for Attention’s Blog:

On June 27 in Kansas City at the International Food Aid & Development Conference, the US government will announce reforms to its international food aid policy. This will be the first time the foods used in this decades-old, billion-dollar program will be significantly retooled. Every year the US sends over a hundred thousand tons of fortified corn-soy bean flour to be used to make porridge to feed malnourished children, primarily in sub-Saharan Africa. Tragically, these flours, grown on American farms and processed in American factories, do not meet the nutritional requirements of these young, growing children […] We need your help to push the US government to ensure that the food sent to these vulnerable children actually meets their nutritional needs to grow and thrive.

We were already there last year to spread the word about this petition and we are here again today to remind you to sign it if you didn’t already. Starved for Attention. 195 million stories of malnutrition. Rewrite the story, sign the petition!