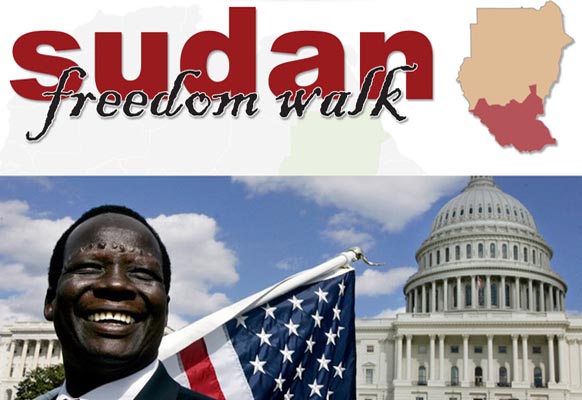 We have a great interest in Sudan. We published many news about the country, about organizations and actions aimed to raise awareness and also support aid workers in the field. In our last Twitter Sunday post dedicated to i-ACT, we invited you to support 100 Days of Action for Sudan: The Referenda Countdown; today we wanted to talk about Sudan Freedom and The Sudan Freedom Walk 2010 which goal is ‘to fight for democracy and freedom from genocide and slavery throughout Sudan’.

About The Sudan Freedom Walk 2010 (more on the official website):

From September 15th to October 7th, former Sudanese slave Simon Deng along side DHRO of the USA Founder and President, Dr. Abdelgabar Adam, of Darfur, will partner to lead The Sudan Freedom Walk 2010 from New York to Washington, DC, to call attention to the referendum in Southern Sudan, the genocide being perpetrated against the people of Darfur and the continuation of slavery and other human rights violations throughout the country. Philadelphia-based Darfur Human Rights Organization of the USA (DHRO) will organize the walk, which calls on the United States to uphold its commitments to the Comprehensive Peace Agreement of 2005 and the United Nations to increase its peace-making capabilities throughout Sudan.

About The Sudan Freedom Walk 2010 in Washington, DC tomorrow:

On Thursday, October 7, 2010, the Freedom Walkers will depart the American University-Tenley Campus, at the intersection of Nebraska and Wisconsin Avenue, NW  and converge on the Capitol for the culmination of the Sudan Freedom Walk-2010.  The walk will begin at 10am Tenley Circle (intersection of Yuma and Wisconson, N.W. right next to the Tenleytown stop on the Red line) and the rally will go from 1pm to 3pm.  Speakers will include Simon Deng, Dr. Adam, political leaders and other distinguished guests.

If you join the walk, you will have a chance to listen to world recognized Southern Sudanese musician and recording artist Emmanuel Jal we already mentioned on the Sama Gazette (read post).

The event is aimed to ‘reinforce the objectives of a free and fair referendum vote in January, 2011 and call for an immediate cease-fire in Darfur’. And we really hope it will. Note that you can also follow Sudan Freedom on Twitter @sudanfreedom.