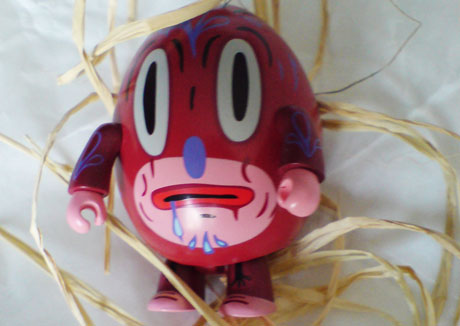 Last year Easter Egg Hunt was all about finding Max Dana’s news drawing, hidden on the home page of the Sama Gazette. But this year it wasn’t about an ‘Easter Sama Hunt’, it ended with something totally new, an ‘Easter Baseman Egg’!

Max is a big fan of art toys and she has quite an impressive collection of them. So when she said this year the hunt would be about ‘toys eggs’ we were wondering what this hunt would really be about… Vinyl eggs, really?

After a few minutes, we found a Gary Baseman’s Egg Qee. The 2.5″ red one, not  the massive 32″ giant Egg Qee, of course. There were also a Dape Egg and several MOTUG Eggs among others. It was a fun and surprising hunt!

Below, the picture of Gary Baseman’s Egg Qee 🙂