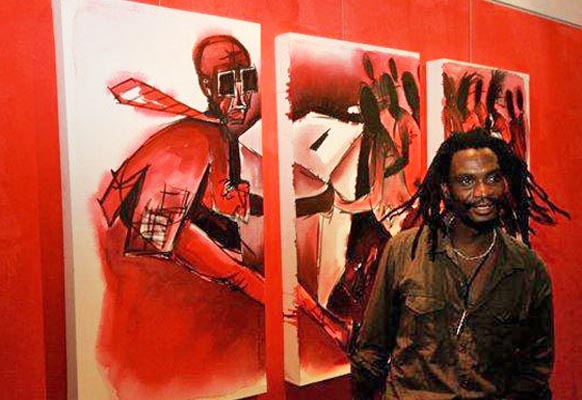 In March we reported the arrest of Zimbabwean artist Owen Maseko while he was participating in a show at the Bulawayo National Art Gallery, an exhibition about Gukurahundi, the massacres that took place in Matabeleland and the Midlands of Zimbabwe in the 1980s. Maseko spent the weekend in prison and was charged with insulting and undermining the authority of the President of the Republic of Zimbabwe. Owen Maseko was freed 4 days after his arrest and since then, he has to report to the police station every Friday.  The artist is now expected to appear in a Bulawayo magistrate’s court tomorrow, on May 26.

Last week, Maseko told SW Radio Africa that while it had been difficult for him personally to be arrested and go to court, his persecution was allowing people to talk about this terrible episode in Zimbabwe’s history. “I think it’s a win, win situation for me. If it goes to trial it means they (police) risk having the Gukurahundi issue openly discussed and at the same time if they dismiss the case it means they automatically have to allow me to re-open the exhibition and the public can actually see,” pointed out Maseko.

Owen Maseko is the Chairperson of the Visual Association of Bulawayo (VAB) and a member of the Bulawayo Arts Forum (BAF), and Josh Nyapimbi (BAF/Aterial Network Zimbabwe) wrote on AfricanColours about the support Maseko has received: “We are grateful to the Zimbabwe Lawyers for Human Rights for their continued legal support to BAF members. Josh Nyapimbi, Raisedon Baya and Cont Mhlanga have been offered similar legal support in the past. We also acknowledge the moral support received from Ministers; Welshman Ncube, Priscillla Misihairambwi and David Coltart. The latter visited Owen while in remand cells. The ministered pledged to raise the matter in parliament this week.”

We think it’s important to support Owen Maseko and free expression for artists wherever they live. Non-governmental organisation Solidarity Peace Trust wrote on their site: “Owen is one of Zimbabwe’s most outstanding young artists – his paintings hang on walls all over the world – and he, like all Zimbabweans and all artists everywhere, has a right to explore and express any aspect of his world.”

Following Max Dana immediate and active support to Owen Maseko (Owen Maseko, a Zimbabwean artist under arrest), and just like we said in our previous post about the arrest, we want to spread the word on this affair and stand up for Owen Maseko to support the artist’s right to free expression. The hearing tomorrow will decide whether he is going to trial or the charges will be dropped. 27 years after army troops began their massacres in Matabeleland and the Midlands, this issue is still so sensitive that people affected cannot dare to speak out; maybe it’s time to root out the evil.

Hope from website Sokwanele posted on Monday an article about the interactive exhibition with recordings from the children themselves. It highlights the plight of the Forgotten Children who fled Zimbabwe’s political turmoil, in search of a better life, peace and security organised by the Solidarity Peace Trust in Johannesburg. Hope said: “I wish our leaders in Zimbabwe could see it too, to show them of the raw talent forced to live in terrible conditions because they, our leaders, have still failed to make Zimbabwe a country that these children and their parents feel confident enough to return to.”

Everyone working hard in Zimbabwe to support Human Rights and free expression needs our full support. We hope all charges against Owen Maseko will be dropped and we will keep you posted about the situation. Please visit the websites we mentioned in this article, they are great sources to closely follow what is is happening in Zimbabwe and to support the people fighting for their freedom.